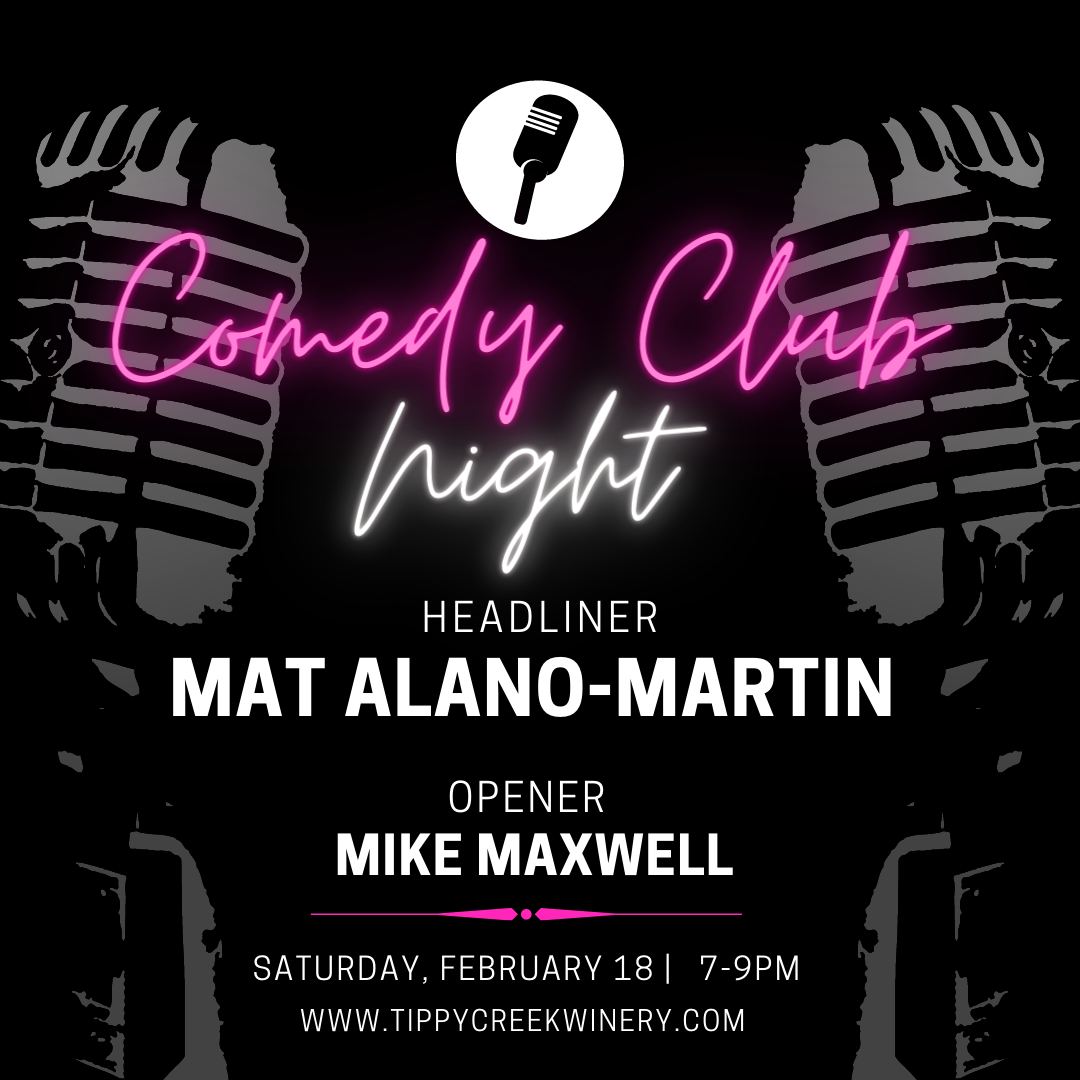 Join us on Saturday, February 18th from 7:00-9:00pm for Comedy Club Night at Tippy Creek Winery. Tickets: $20 per person Headliner: Mat Alano-Martin Mat Alano-Martin comes to comedy from the world of

Join us on Saturday, February 18th from 7:00-9:00pm for Comedy Club Night at Tippy Creek Winery.

Headliner: Mat Alano-Martin
Mat Alano-Martin comes to comedy from the world of rock and roll, where he spent 10 years touring North America as a member of several unknown bands and as a tour manager for much more successful, well-known bands. With a comedic style that bridges the social and political views of his indie-rock background with the attitude and sensibilities of his rural and blue-collar youth, Alano-Martin has appeared at comedy clubs, theaters, punk rock dives, redneck roadhouses, casinos, colleges, living rooms and everywhere in between.
Alano-Martin’s debut album “Profiled as Such” can be heard on the Sirius/XM Raw Dog comedy channel and he has appeared on NPR, the nationally syndicated The Bob & Tom Show and on Laughs on FOX. He has worked with such notable acts as Patton Oswalt, Tig Notaro and Marc Maron and has performed at several festivals and prominent showcases across the country and beyond including:
– 208 Comedy Festival – Boise, ID– Bird City Comedy Festival – Phoenix, AZ– The Black Box Comedy Festival – Atlanta, GA– Cleveland Comedy Festival – Cleveland, OH– Comcast’s “Look Who’s Laughing Now” – Indianapolis, IN– Comedians You Should Know – Chicago, IL– Finger Lakes Comedy Festival – Ithaca, NY– Fresh Out – Los Angeles, CA– Gilda’s LaughFest – Grand Rapids, MI– Green Gravel Comedy Festival – Iowa City, IA– Hong Kong International Comedy Festival – Hong Kong, China

Opening Act: Opening Act: Robyn Gilleran
Robyn Gilleran is a comedian based in Detroit and is the better (looking) half of Hard G Comedy with her husband Jason. This former fat kid and current actor/model is the mother of teenage boys and has a thing or two to say about growing up, motherhood and life in general. She has performed across the US gracing the stages at Mark Ridley’s Comedy Castle, One Night Stan’s Comedy Club, Traverse City Comedy Club, Off the Hook Comedy Club and Key West Comedy Club as well as Gildas Laughfest, and the Detroit Women in Comedy Festival. She’s sure to catch you off guard and teach you to never judge a book by her cover.

Show is R-rated. No guests under the age of 21 permitted; valid ID required for admission.

Tickets must be purchased together, if you wish to sit together.

Wine Flights will not be available for the show.